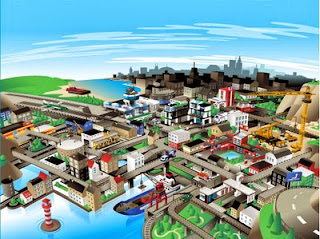 A few years ago, when I was running the corporate race, I never made time to meet new people or to "stop and smell the roses". My day was filled with tasks: take kids to daycare/school, go to work, work, pick up kids from daycare/afterschool, cooking/feeding, homework, washing the kids, work (it's listed twice on purpose), put kids to sleep, maybe shower, knock out after 2 minutes of reading the news...and then start it all over again. It was jam packed, so full that I would sometimes get a spine tingling sensation that I forgot to pick up my daughter at school or left my son on the curb by accident. After getting a whiplash from checking the backseat for my kids, and having my stomach sink to my feet from not finding them there, it would take my head a few moments to remember that it was Saturday and the kids were home with their dad while I went grocery shopping.

But now things are different. I don't run that race anymore, and I probably wont for a while, if ever again, so I have more time to literally stop and experience the world around me.

When I visit the local fresh food market, I hear the lisp in the cashiers speech, and noticed how her ponytail bounces happily every time she turns her head. Her face is bright and hopeful when she asks me if I'm interested in their specials. She asks me about my kids and smiles genuinely when she says my son's puppy dog sad face is adorable. I see the contours of her wrinkles, the upward curve of her laugh lines, and the crows feet around her eyes that give away a hint of her constant laughter. She's been there for years and I've only recently become aware of her countenance.

I see the crossing guard every afternoon when the kids come out of school. I now notice how he frantically rushes kids and their parents across the busy intersection, stepping in front of cars with his arms up and his eyebrows furrowed. The kids run, as directed, and the cars honk at him for getting in their way. There are a lot of kids crossing that intersection between 2:45 and 3:15 pm, and we trust the crossing guards with their lives. He would step in front of a moving bus to make sure none of the kids get hurt. I know this because I saw him do it!  He too has been there for years, and I just recently noticed his manner.

I've finally met other parents in the park, the fathers who run around with their kids in the playground as if they were kids themselves, the mothers who all have stories to share about how wonderful and horrible their kids behave. We laugh and make light of stressful parenting and relationship moments. It's one thing to read perfectly crafted parenting stories online, it's a whole other experience when you witness another person's body language, hear the inflection in the tones on specific words, their unedited choice of language, and their laughter....it speaks volumes.

I notice the other children in my my kids' school. There is a lot more ethnic variety than I ever realized. I know which kids, by face, are friendly and which look like borderline bullies. I can tell from my son's reaction that he's spotted a friend going to the park, or if he saw someone he doesn't like. Best of all, I've met my daughter's friends. Now, after school, she tells me about her day, which friend did what, who said something funny, who got sent to detention, and I know who she's talking about. I think my daughter and her friends could fill up a couple of middle grade novels. They're a funny group of kids.

Part of all this acknowledgement of the world around me, I think, comes from writing. I try to find out more about who I'm talking to through their body language, their fashion sense or lack of, their facial movements, their gestures, and choice of words. I learn to define characters by looking, almost studying the way people in my world behave. When I decide on a character, I think "She's a cross between Mary and Jane, and maybe a little bit of Kate," and then I take their habits, their traits, their histories, and mesh them into rich complex characters.

Sometimes a person's history, or a simple object will prompt a story in my head. The other day I noticed a father wearing a worn leather watch, peeking through a rolled up button down shirt. He took off the watch before he started playing with his kid in the playground. Ever since, I noticed he does this every time he goes to the park. Does the watch have meaning? Is it a family heirloom? Does he have a wrist injury? There's a story to tell there.

And you never know when or where inspiration will hit you.

Almost every day, after I pick up the kids from school, I stop at a small coffee shop to get my second cup of coffee. While on line, I overheard a very old woman tell her husband that she wanted two sugars in her coffee. He argued that she should only have one. She then tried to stomp her cane on his feet but kept missing. He laughed and then ordered her a coffee with two sugars. That was sweet, I thought. After I bought my coffee, my kids and I sat at the table next to them. I overheard their conversation in Spanish and began giggling -- he was telling his wife dirty jokes and they were hilarious! This couple sparked a dialog in my head that went into a scene in my novel, A Selfish Moment, between an older couple bickering but laughing about it throughout. It was perfect.

To think that just a few years ago I was rushing through my life not noticing the people in my world. Hopefully I'll never miss out again.