Sometimes, stories find their way into our lives and flips us around.
Posted on November 21, 2013 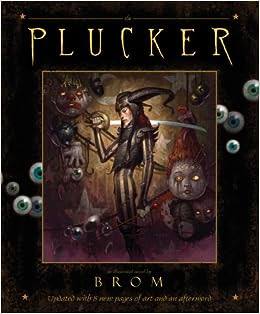 A few years ago a friend of ours went to Comic-con in NYC and grabbed an autographed copy of Plucker, an illustrated novel by Brom. He stopped at our house on the way home and left the copy on our kitchen table.  After several years and hundreds of returns to my house, our friend never asked for it in return. It simply slipped his mind.

At the time, from the other posters of Brom he brought over that day, I believed Brom's work to be a bit strong for my taste. Bleeding, half-naked princesses and gory horns jutting out the forehead of humans and non-human-looking creatures....I was just not interested in it.

Into our bookshelf the book went.

Then, my daughter turned eight and her interests started expanding. She went to our small but eclectic library in our bedroom, filled with Amy Tan and Julia Alvarez novels leaning against a series of Asterix hard-cover comic books and Our Dumb Century from the folks at The Onion, and spotted Plucker wedged in between. She pulled it out and took a peek.

This was about the time she started getting into Monster High, zombies, and Tim Burton movies. It looked scary. She wanted to read it, but I wasn't sure she could since it was Brom's work. So, I had to read it to see if it was suitable for her age.

And...of course... I loved it! She loved it too. I'd classify it as a mild gothic horror story, suitable for kids who have watched The Corpse Bride by Tim Burton or read Coraline by Neil Gaiman.

Well I just finished reading it again, but this time I had a different perspective - that of someone who writes, creates, and publishes stories. I read just about anything I can get my hands on, and truly value the hard work that was put into a book's presentation. Plucker is really something. The detailed sketches and paintings, the specialized fonts, the layout of paragraphs around specific pieces or art, the use of different artistic methods in each of the drawings...it's really is a piece of art.

This brings me to the reason of writing this blog entry.

When I was younger, I would spend all my hard-earned allowance on large Moleskin sketchbooks. I loved to sketch with different pencils, chalks, crayons, colored G2 pens, and anything in between. I loved writing poems and sketching something to go with it, or a super-short story and sketch out the protagonist with large sad eyes and pouty lips. Sometimes I'd draw a dragon sitting by a ravine, or a stuffed animal on my shelf. I'm not saying I was the best artist around, but my art was good enough to share with other artistic friends in grade school and high school.

So what happened? Why did I stop drawing but kept writing?  Ugh...just thinking about it makes me both angry and sad.

I dated this guy in my sophomore year at NYU. I thought he was The One. He was The One alright. He was the one who, in a fit of jealously, found a few of my sketchbooks filled with several years worth of drawings and writings and....he threw them out.

Now, this was before everyone had a computer at home, when people still wrote on paper and drew with pencils and carried their precious Moleskin sketchbooks and art supplies in their backpacks just in case they caught something on the street or in the subway that inspired a moment of creativity. The stories, the poems, the journal entries that dated back to grade school were gone...forever. And shortly afterwards, so was he.

Years later I relayed this event to an old neighborhood friend, Dave. He is an incredible artist - the things he could do with spray paints and pens was breathtaking. He was so angry at the whole thing that he kept asking me the guy's name so he would kick his ass. Dave was a big fan of my real-life sketches. I understood his anger. He understood my pain.

I don't think I ever recovered completely. Eventually, I graduated and started working and bought myself my own computer and started, slowly but surely, writing again. Things were safe on my desktop, digital, password-protected, away from potentially jealous tempers. Now everything I write is being backed up on an external drive and online. I vowed never to lose anything I create ever again, either by earthquake, fire, or nasty boyfriend. NEVER!

I was able to recall several poems, and recreate some of the stories out of memory, but my sketching died with the incident. My fingers didn't have it anymore. They couldn't trace the lines of the things I saw in my mind, they didn't follow my direction. It made me sad to see how much I've regressed. I stopped drawing for a very long time, except for the occasional doodling along the rim of my notepad at work.

A few years ago, my daughter and I began art sessions at home. My daughter has always loved to draw, paint, color, cut, paste, and do anything creative. Lately she's been doing a ton of things with clay. She thinks my cartoon drawings are that of a genius. I love my kids...they think I'm a super hero with extraordinary powers.


I haven't ventured further than my cartoon creations. But now, after reading Plucker again, with a different mindset and perspective, I feel inspired. I have more patience now than years ago, and I have more years between me and the incident, so a lot has healed.

Maybe i'll pick up a pencil and sketch a "real" dinosaur, or a dragon, or my left hand, or my daughter's smile, or ...the choices are endless!

And if I find I can't sketch like I used to, at least I'll never say "I wish I had tried."