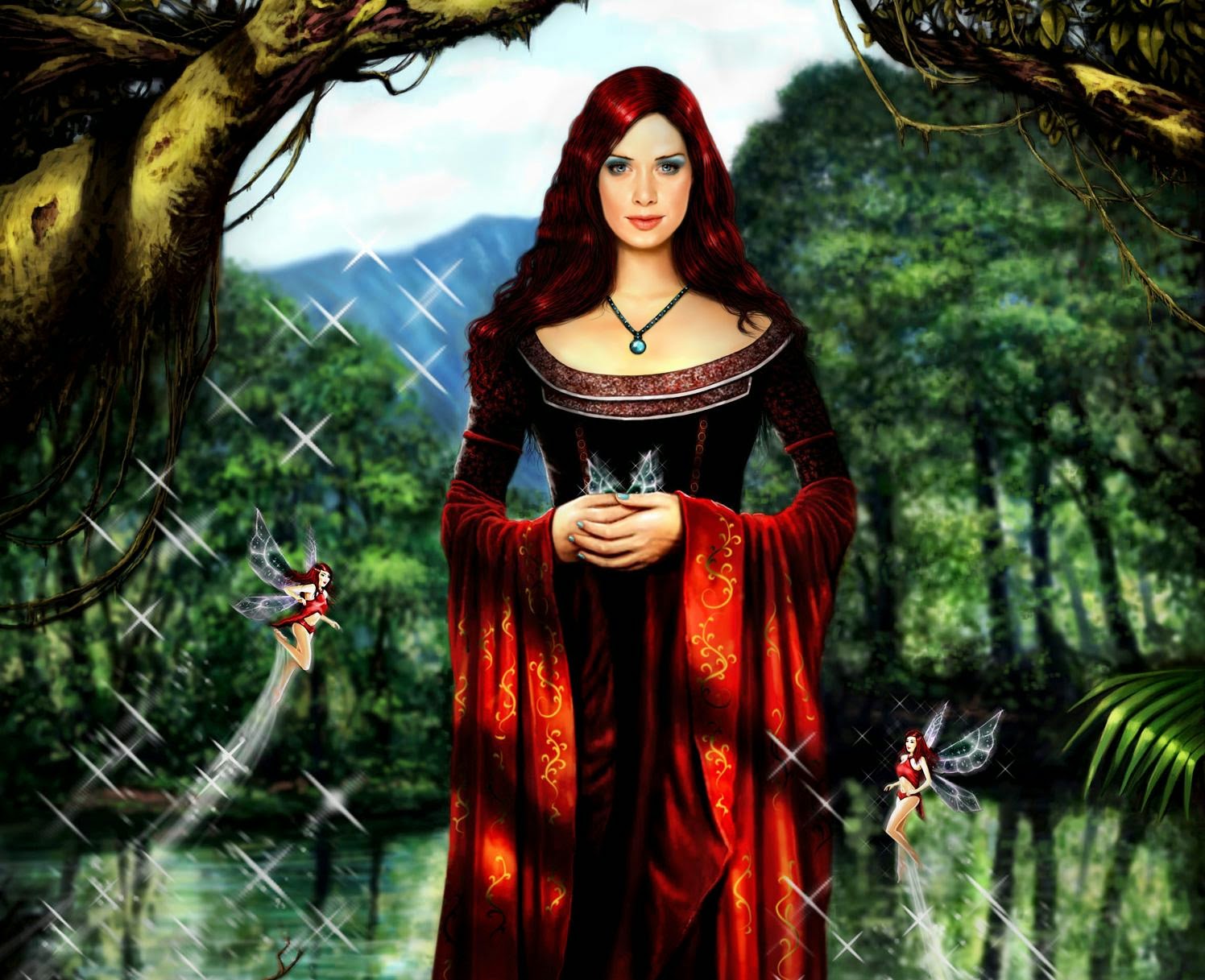 Queen Keira rushed into my bedroom chamber gasping for air. Gray lines and brown specks covered her ivory skin. The waves of her scarlet hair stopped halfway down her frame before transforming into a wiry sage color, withering and falling to the floor with every step.

"Anadora, bring me a cup of Midnight Dust tea. One spoonful. Hurry."

"What has happened Your Grace?"

I scrambled barefoot to the kitchen downstairs and cupped water from the iron cauldron and poured the steaming liquid into a cup. I tossed in a spoonful of the rare Midnight Dust powder.

The Queen coughed as she entered the room behind me. "Put...more."

I nodded nervously and doubled the ingredient, taking care not to waste a single particle.

"I said more!" The Queen slammed her hand onto the cupboard and began coughing uncontrollably.

I dashed over to her side with the tea in hand. The queen took a sip and swallowed hard as the medicine made its way to her stomach. I stared helplessly as the Queen Keira sat back in the worn wooden side chair and rested her head against the stone wall. Her unsteady breath grew calmer, more peaceful. She raised her head weakly. "I don't think it worked."

The queen caresses her neck and runs her wrinkly fingers through her hair. "What else has the poison done to me?"

"Your Grace...the poison seems to have created a rash all over your hands and face."

The queen untied her black velvet robe and asked me to survey her neck. "What else do you see, Anadora?"

My throat tightened up as I glanced upon the lesions that have eaten away as the surface of her chest. As she slipped her arms out of the robe's sleeve, I saw more sores and spots lining her black satin gown. The veins along the crook of her elbow and down her wrists were the color of burnt charcoal.

"Does my face look as horrid as the rest of my body?"

My chin trembled as the words exited my lips. "Yes... My Lady... except..." I grabbed hold my hands to control the shaking. Tears welled up as I watched the whites of her eyes slowly turn obsidian.

The Queen sighed. "The Midnight Dust will not save me. I'm too late."

I kneeled down at her feet and sobbed. "Forgive me, My Lady. I should not have hesitate with the tea. Please forgive me."

The Queen inhaled profoundly and released a hum into the air followed by a few words that sounded like a magic spell. Within seconds she was restored to her former glory, with her flawless skin shining into the dim evening night and her crimson tresses flowing over her breasts.

The Queen laughed wickedly as she closed her robe and whipped her fiery locks over her shoulders. "You silly girl. This was just a test."

"Yes. A test for your loyalty, Anadora." The Queen motioned for me to rise to my feet. "You passed. Unfortunately, you are the only one thus far." She chuckled to the side. "It is so hard to trust anyone. Did you know that one of the cooks was actually happy at the sight of my suffering? Me! Her queen! What was her name... Debina, no, Defilia, no..." The queen tapped the tip of her long red finger nail to her chin. "Oh yes, Delila! She couldn't wait to see me die. Unfortunately for her, I didn't need her tea to cure me."

I cleared the tears from my face in two brusque swipes. "So you were never poisoned."

"Well, I did have to drink some of the Hombre Root mushroom, to get my hair and skin to this condition. But the tea stops the progression. My spell simply sped up the cure."

"But... what if I wasn't here? Or if I couldn't find the jar of Midnight Dust powder? Or if I didn't give it to you in time?"

The queen swayed side to side as she walked around the center work table. She picked up a bejeweled goblet from a case and pulled it close enough to her eyes to see her own reflection in the rubies and emeralds. "I had prepared a tea earlier in the evening and drank it before I came to wake you." She placed the goblet back down and continued walking the length of the table without looking back at me. "I had already stopped the poison."

"But...the Midnight Dust tea I made you...you asked for a spoonful. Three in fact."

The Queen smiled grandly at me. "Yes. And you gave it to me. Thank you."

"But the Midnight Dust flower...it's extinct."

"And you wasted it."

"It was not a waste, Anadora. I need to know who I can and cannot trust."

My eyes scanned the floor wildly. "Half a spoonful could have treated at least a thousand faeries if they were to contract a deadly plague. This herb is a cure for almost any disease or poison...and you asked for two more spoons."

"Fine. Maybe I shouldn't have asked for more than one spoonful, but I needed to see how far you would go for your queen."

"Did the other make tea..." My voice strained with a pain I had never before felt. The squandering of such an important substance, a medicine that is saved for use by only the royal family and those they deem worthy, because of the Queen's supposed purity, spirituality, and holiness.

The queen made it around the table and walked towards me. The slow, heavy rhythm of her footsteps came to a halt as the queen stood directly in front of me. "Do you disapprove of my methods, Anadora?"

I immediately bowed my head. "I beg your pardon Your Highness. I did not mean to question your actions. Please forgive me."

The queen reached for the upper tip of my right wing and glided her fingertip along its edge towards my back. "Apology accepted. Do not fret, Anadora." Her voice was more righteous than before. "You have proven your loyalty. And I expect that no one else will know of our little secret. Do I make myself clear?"

The queen nodded and turned for the door.

"May I ask, Your Highness, what happened to Delila?"

Holding her head high, without an sign of remorse, the Queen said, "I ripped off her wings and let her bleed to death."

I gasped, but closed my mouth before she could notice.

"Then I fed her carcass to the dogs."

My jaw clenched at the imagery. Screams were aching to escape my chest, but I held them back.

"That is what happens to those who betray me."

Once the kitchen door slammed shut, I covered my mouth with the first towel within reach and released a hollow scream. She couldn't even remember my sister's name. It's Delila Periwinkle, daughter of Mali and Hernan Periwinkle. She was my sister...She was my younger sister you evil witch!

After a few minutes of sobbing alone on the damp kitchen floor, I rationalized the entire situation. She's the Faerie Queen. She won't remember the names of anyone who works for her, especially those who fail her test of loyalty. My sister wasn't the only one who failed.

I stopped shaking my head and slowly widened my eyes. I gasped. She hasn't tested everyone yet!

I took one long deep breath and jumped to my feet. I grabbed a jar from the top shelf and labeled it Delila and then poured the Midnight Dust powder inside, pushing each grain with my bare forefinger. I shoveled a small amount of coal dust from the fire underneath the cauldron and slid it into the Midnight Dust jar. Although no one was in my room as I crept inside, my heart pounded faster than ever before. Anger, sorrow, and satisfaction simultaneously washed over me as I rested my head on my pillow. My breath normalized and the tears streamed freely back towards my ears. I closed my eyes and imagined the look on Queen Keira's face when the antidote doesn't work.

Will she know it was me?

I saw a vision of Delila's rosy cheeks in a sweet childhood memory. She squinted her hazel eyes at the sun's rays as she fluttered uncontrollably from daisy to daisy. It was her first flight.

Will the queen remember my name?