Magical Moments With Art
Posted on June 2, 2015
One of the things I love about blogging and reading up on other blogger's lives is the inspiration I get to share things I wouldn't normally share. I just read Sara C. Snider's post, Magical Moments, about her recent experience walking through the woods, and the question she posted at the bottom inspired me to write this entry. She asked, "Do you have any favorite magical moments?"

At first, I thought, "Nope. Not recently." But then, I asked myself, "If I had to choose a magical moment from the past few weeks, what would it be?" Instantly, I thought of art time with my 7-year-old son. Here's why...

Until just a few weeks ago, my son hated art. The task of coloring or drawing was always met with groans or lazy arms that suddenly lacked the strength to hold up a crayon. And that's what it was to him - a task forced upon him by his art teacher or his parents. His art sessions at home would often end with a quarter of a sheet of paper filled with his name and maybe a stick figure with a happy face. And that's after, maybe, an hour sitting at the table staring at the tray of art supplies. Inspiration was missing, and he hated the process.

There are countless articles on how art is important for childhood development and the correlation of a regular art routine to high academic performance. Not to mention that we (me, my hubby and my daughter) all love to create. I wanted to get some kind of creativity out of my son if only to round him out as an individual. If he wanted to create a piece of work by kicking a soccer ball at paint cans against a brick wall, then so be it. Heck, give me a page full of soccer ball sketches! I was open to anything.

Then, as I was throwing a softball with my daughter one afternoon, I wondered how is it that this natural artist took to softball? And then it hit me - I'm playing softball with my daughter. I grew up playing softball, so it was no accident that I signed her up when she was 9 years old. I showed her how to throw, how to run, how to bat, and how to make plays. As she got better, we played harder. The arm movement and back motions involved in throwing farther and faster was something I explained to her while throwing with her in the park. Holding the bat correctly and evening out her swing so that she bats with force is a technique we went over during batting practice at an open field. We were doing it together. I didn't give her a task to play softball, I was playing softball with her.

So, I though I would try this with my son. Usually, I'd have my son sit at the dining table with paper and art supplies while I worked on my writing on my laptop or did some chores. It was an assignment he did by himself. But that has changed. Now, we both sit down at the table with papers in front of us, and I show him how to create multiple pieces of art using different techniques. Just as I did with my daughter, I don't just tell him how to do it, I show him.

It worked like magic! Below are some of his pieces.

We place dots around a page and then connect the dots randomly with a ruler to create sections to fill with different colors. Roman loves using the ruler, and he makes a swishing noise when drawing the lines. Whenever he came across a crayon color with a weird name like Cornflower or Inchworm, he pointed them out to me. After finishing his piece, he said the next one will have more Cornflower. That made me giggle. 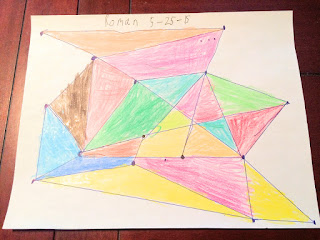 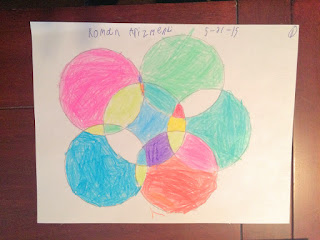 We fill the page with drawings and scribbles. Roman chose a theme - Aliens In Space. It eventually turned into a scene instead of a page of doodles, but hey, whatever makes him pull that pen across the paper works for me. His aliens are all happy, even the torpedo-looking aliens at the bottom have smiles on their faces. My favorite is the one-eyed fuzzy blob in the upper left-hand corner, which he claims is tired from space travel. And that swirl? It's a black hole. 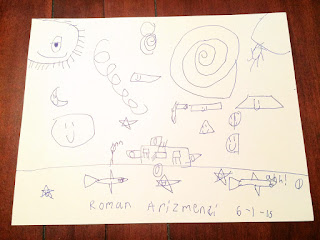 It's only been a couple of weeks, but I've received more art from him than his art teacher has sent home all year. And more importantly, he's proud of his work - something he's never shown from the art he's brought home from school. It makes me wonder about what they are teaching in 2nd grade art class. Maybe I should give the teacher a call...

The groans and moans are slowly depleting, and the resistance to art is fading. Although he still loves his sports and outdoor play, I'm getting him accustomed to a routine with art. And despite the initial grunts whenever I call for art time, Roman brings in the tray of supplies and two sheets of paper - one for him and one for me - and asks in an eager tone, "What are we doing today?".

That alone is magical.

What techniques have you used to get your child to love art?

I'd love to hear your stories!