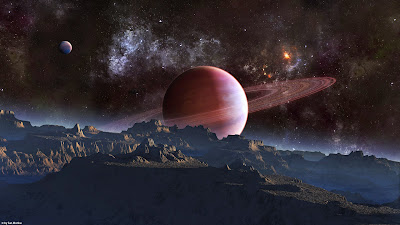 “Dig. Dig. Dig. It’s a temporary gig.”  Today is my first day on Nero-12.  A mist of dust twirls in the air and scratches my cheeks as I shovel dirt over my shoulder. I raise my hand to wipe my face, but my thick glove prevents me from doing so. The sense of urgency to continue my task battles with my curiosity and loses, and I take a moment to look around. Dozens of other human silhouettes are mining into the floor in a mechanical rhythm, lowering their shovel and raising dirt like robots, in a line snaking through a ditch whose jagged walls stretch upwards over twelve feet. My arms catch up to the tempo reverberating in the cave; crackle-shush, crackle-shush.

Keep quiet and dig - those are my orders. I'm not sure who gave them, but I know that's my task.

From the corner of my eye, I can see the controller speaking into a handheld device. “A possible situation,” he says, and then floats away in a hover vehicle.

“Keep digging,” a man behind me whispers and I jerk my arms in response for a millisecond before returning to the rhythm.  “Take it day by day, repeat your mantra and you’ll survive.”

“Dig. Dig. Dig. It’s a temporary gig,” I mumble once more. It’s difficult to keep your mind from wandering when your body is performing monotonous labor. The metallic dirt thrown in the air upon each lift of the shovel; my sore shoulder muscles from just a few hours of work on my first day; the guy behind me giving me advice on how to survive my sentence in The Service; my home planet Volari; my sentence; home; The Service . . .

A few decades ago, a meteor destroyed three-quarters of our home planet and practically drained our oceans. There wasn't enough water to drink and even less for crops and farms. It was a desperate time for our world; everyone prayed for a miracle.

I remembered when The Service discovered the Nero solar system and its planets with abundant amounts of clean water under their surfaces. All of Volari celebrated as our leaders planned to mine the water and transport it back home. I remember my parents rejoicing, and my father volunteering to colonize Nero-12, along with most of the men of that generation.

As the years past, the atmosphere proved to be too volatile for colonization, and the people who spent years mining returned with strange illnesses. The long lines of volunteers diminished, and re-enlistments to The Service dropped drastically within the decade. The state had to find other means to employ workers, but who would sacrifice their health to live on a distant planet for months, maybe years at a time performing hard labor?

As the population began to shrink again, the leaders stepped in and changed the question: Who should be sacrificed? To that, the public replied almost unanimously.

Violent criminals were sentenced to decades in The Service as diggers. Some of the worst killers, child molesters and rapists spent an entire lifetime on Nero-12, digging until their hands could no longer hold up a shovel. The people of Volari survived extinction with only the vermin of society as the cost. It was a small price to pay for a population of now only four million people.

I remember my parents, retired at the time, worrying about this. "Be careful Erik, keep an eye out for changes in the law," they'd say. "The leaders will do what it takes to help the people survive, but they will surely sacrifice everyone else for their own survival."

After another decade, the violent crime rate dropped to all-time lows, so the number of workers decreased drastically. As a result, the state became stricter, and laws were modified so significantly that misdemeanors were given sentences to The Service. Minor theft got you six months on Nero-12. Arson got you a year, maybe three years if you destroyed a government installation. Riots broke out, and demonstrations were held in protest to these new regulations, and everyone arrested from those riots were sentenced. The smallest infraction, no matter if it was justified, resulted in a sentence. Felony assault, for severely beating up a cop who grabbed my wife's ass, got me two years in The Service.

“Keep digging,” the man behind me says. “Whatever you're thinking about, forget it. If you lose your rhythm, they’ll start monitoring you. Just another few hours and we’ll be done for today. Don’t let your mind wander and just keep digging.”

I feel something on my neck, and I shoo it away. The bugs on Nero-12 are tiny, ant-like creatures. I remember a news program stating that these bugs weren't a threat to the diggers. Representatives of The Service insisted that the inmates worked in a disease-free environment and that the bugs were more of a nuisance than a danger. But I wonder, would they tell us otherwise?

I shake my head to force out the thoughts. “Dig. Dig. Dig. It’s a temporary gig.”

I've just got another few hours of work, and then I can ask this guy more questions. He seems to know how things work on Nero-12. I wonder how long he’s been here. Not everyone survives their sentence in The Service, as is common with prisons throughout history dating back to the times of Earth before its sun burned out. The rumors are that some inmates die from cave-ins and unexpected sinkholes in the unstable caverns, some kill themselves before the controllers could catch wind of their insanity, and some are killed by other inmates for no good reason. Most of those that come home after finishing their sentences say they remember nothing but digging. Only an unlucky few finished their sentence still able to recall every painful day away from home. Those guys eventually go crazy.

There were leaks about memory wipes being used to control the inmates. Representatives from The Service didn't deny the claim. They insisted that the technique was only used for the safety and sanity of the inmates and that it left no lasting effects on the inmates once they returned home. “Some inmates need it more than others,” the representative had said on the news program.

A dreadful question pops into my head, and I stop shoveling. “Hey,” I whisper to the man digging behind me, “what day is it today?”

I return to the motions, but the moves become harder to execute. I shake my head, again and again, to stop my mind from drifting, and concentrate on the black ground underneath my feet, the shadow of my body casting down from the light post above, and the bugs crawling in the dirt in my shovel.

Suddenly, a million invisible insects crawl all over my body. I shudder art each minuscule step. "It's all in my head," I say to myself. "Dig. Dig. Dig. It’s a temporary gig." The sensation goes away, and I continue the tempo. I have to keep it together. It’s only my first day. I have to keep digging. Don’t think. Dig.

I remind myself of all that is important to me, of why I have to survive this. My wife, my newborn daughter, my two-year-old son, my family. I fight back the tears welling up inside my goggles.

The wretched bugs return, treading down my neck and back. "Dig, damn it!" I try to ignore the sensation. “Dig! Dig! Dig!” I shovel harder and faster, flipping dirt farther behind me, shouting the word over and over again through my clenched teeth, ignoring the insects as they march down my legs.

One bite. Two bites. Ten bites. They're piercing my skin. Their venom fills my veins. I slam my shovel on the ground and tug at my wetsuit. I have to get them out! I have to get the bugs out!

“Not again! There’s nothing there, Erik. It's all in your head!”

They're swarming up inside my sleeves, burrowing underneath my skin, tearing at my muscles, eating my flesh, sucking the blood directly out of my veins. My nerves feel like they are being tugged, plucked like guitar strings all the way up my spine. They’re marching in my hair, inside my ears and nostrils, towards eyeballs, and…they’re everywhere! My throat closes up, and I can’t scream for help. The insects are suffocating me, riding my saliva down my esophagus and into my stomach. I gag, fall to my knees, and begin heaving.

“There’s nothing there, Man. Get up and dig before…”

The whirring sound of the hovering vehicle gets louder until it stops directly over me. The controller jumps down to my side, takes out a white pistol and points it to my shoulder. I feel a shock, and I see memories of my life reel before my eyes:  Cynthia’s pink lips, her smooth thighs, Jerome’s silly little giggle, and Karina’s tiny newborn feet. My memories dig into my gut, wrenching each muscle until my chest aches. Reality hurts. Two years before I will see them again. Two years…

I feel another shock. Slowly, painfully, and then almost thankfully, I feel nothing at all.