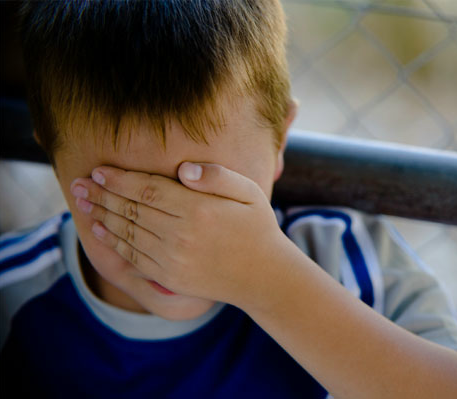 “Forgive me Father, for I have sinned.” I stretch my neck up to peek through the tiny holes in the crated window but I could only see a silhouette of an adult. The silhouette turns in my direction and I sit up as straight as possible with my hands folded on my lap.

“Child, what have you done that needs forgiving?”

It's Father James! He's so cool, but I can't say anything. We're not supposed to address the priest directly when confessing. Flashes from today's events flicker in my mind and I remember why I'm here. “I threw up in school.”

“No Father. I forced myself to throw up, sort of.” I wonder if he can see me through the tiny holes. Just in case, I wrinkles my face to show signs of regret.

“Child, why would you do such a thing?”

“Because of Jack McClinton.” I suck in a quick breath. What are the chances Father James knows the bully that has been tormenting me since my first day of fifth grade.

A tongue click and a few huffs later, Father James finally responds. “So you forced yourself to throw up because Jack McClinton was bullying you?”

“Yes and no, Father.” I want to ask him how he knows Jack is bullying me, but I feel it's disrespectful to question his knowledge of things. Adults seem to know things about you without you having to tell them.

He lets out another long sigh. “Why don't you just tell me what really happened.”

I lay it all out for him in a single breath. “You see Father, I overheard Jack telling one of his friends that he threw up once as a result of his brother throwing up in front of him. So I thought I would get him in trouble if I pretended to throw up in class so that it would make him throw up.  Well, it worked. But then I really threw up and then a few other kids started throwing up. Then Jack told on me.”

I hear Father James chuckles under his breath. He clears his throat.  “My son, I believe you paid the price of your treachery. You are absolved of your sin if you do this one thing for me.”

“Anything Father. You name it!”

“The next time Little Jack McClinton bullies you, you make sure to stand up to him equally. If he shouts at you, you shout back. If he hits you, you hit him back. There is no sin in self-defense.”

“Really? What about turning the other cheek?”

“Never mind about that. Just remember not to stoop to his level as you did today. Today you were the bully, and that is a sin. Little Jack needs some growing up to do; there is still hope for him. Do this and he will soon learn to respect you. Do you understand?”


I don't quite get his explanation, but he's the priest, so I guess the next time Jack pushes me I'll push him right back. And since Father James said it was fine to defend myself, then I guess I won't have to come in to confess about it. Wow, this turned out better than I expected!

As I open the door to exit the confessional booth, Father James gives me one last bit of advice. “Oh, and next time you pull a stunt like this, cover your nose. It will keep you from throwing up.”