A Bluebird's Melancholy
Posted on December 16, 2012 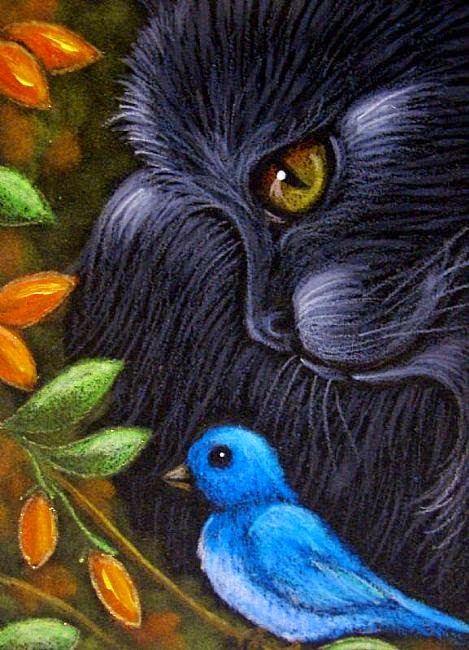 There she is, my beautiful black panther pacing under my bird house. She looks up at me repeatedly, taunting me with each glance. Her lime green eyes stare up at me as she licks her lips. I am food for her. She owns my heart.

I know the thought of an Eastern Bluebird being in love with an alley cat is ridiculous. The thing is…I was an alley cat in my former life. I was her mate. Missy was wonderful.

Missy and I used to rummage through overflowing garbage bins in the best of neighborhoods, feeding on the abundant left overs of small families with large wallets. Roast pork loin drizzling with a sweet mango sauce, broiled chicken resting in a lemony white cream, and sometimes we would be delighted to find red snapper. Oh, how I loved red snapper in a white wine sauce, littered with cilantro, red peppers and capers.

Missy wasn’t too picky, she ate almost anything edible. The things she put in her mouth would often make me gag. At first, I tried to resist the delicious scent of a good restaurant, but when La Sorrentina started serving red snapper as part of their menu, their back door became my favorite foraging ground. Missy and I would fight, well, like alley cats whenever we found the tasty fish. After a minute of play, I would hand the food over and Missy would give me half as a reward. It was an unspoken agreement that we lived by for years, until I saw the towering wheel of a garbage truck heading straight for me.

Was it last year? It’s hard to tell how time passes for a blue bird. I am still not used to it. I remember the leaves were just starting to fall when I last gazed into Missy’s green eyes, and now the trees are full of leaves again. Maybe it was less than a year. It was pretty darn hot, but then again, it was hot all year round for me when I was a furry cat stalking these tree-lined streets.

We went through two snowy seasons together. Missy was older than me, spent more time as a cat than I did, but I guess age doesn’t matter to felines.  She used to say my fur was the color of the metal cans we scavenged, and that my eyes looked like lemons. I used to call her my panther because of her black fur. She didn’t like that very much.

Missy wasn’t always an alley cat. She didn’t recall much of her prior life as a human, only that she loved to swim and was very good at it. Sometimes she would dip into the park lake, in front of a slew of people gawking at her, pointing and smiling. By the way Missy twisted and twirled in the water, it seemed she could have been a fish in some other prior life, maybe a dolphin. I shivered behind a bush waiting for her to finish. The mere thought of wetting my fur, and of being around so many people, made me nervous.

I don’t recall much of my own human life before being a cat, except that I loved to eat different foods, maybe cook them the way humans do. Missy always thought I was fussy about eating but I didn’t want to put just anything in my mouth. She didn’t complain too much though, especially when I’d lead her to a dish emitting mouth-watering, tantalizing smells from the back of a restaurant. Sometimes a human would put out a plate for us along a back door. After licking our plates clean, Missy and I would skip ransacking those garbage bins and head out to the park for a long nap under a bench.

The aromas don’t fancy me now that I am a blue bird. The food I once loved doesn’t sit well in this body. I can’t even chew it. My happy memory will have to stay just that, a memory, until it vanishes like all the others.

I struggle almost every day to remember Missy and our time together.  I don’t want to forget her. Lucky for me she likes to kill birds, so she visits me often, usually just before sunset when the people in this house dump out their garbage for the evening.  When I see her, my memory comes back. I miss her so.

Missy looks up at me as she prepares to pounce. She is afraid of heights, which I always thought was funny, but she is a good jumper. She hasn’t yet reached my human-made, wooden bird house hanging high above ground. That doesn’t keep Missy from trying. And if she did reach my house all I would have to do is hop off and flap my wings, and then I would be the one teasing her.

I wonder if she knew who I was, would she still want to eat me? Maybe she knows and just wants to play-fight like we used to. Whatever the case may be, I hope Missy never gives up.