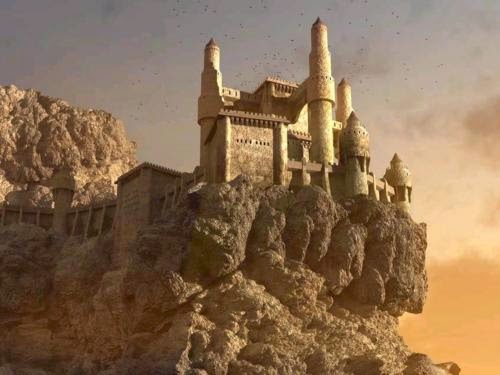 In the ancient palace of Nir, at the top of the highest mountain in Ornesta, Princess Qinadi struggles with her nanny as she combs her long rosy tresses.

"Sit still, mistress. There is still some dirt in your hair. I ought to whip Joden for taking you to the mudslides. Look at all this dirt."

"I don't want long hair anymore. Why can't I cut it off?" Qinadi asks.

"Your long, pink tresses are a gift from the gods, and we must respect their gifts." Her nanny pulls out a twig from another section of Qinadi's hair and clicks her tongue.

"A gift that gets in the way of having fun."

"Now hush and concentrate on your diction."

Qinadi sighs and lifts the sheet of paper with Kilisi words in different conjugations. "Su Baleia, Su Balee. Su Baleou... Baleeeouumi. Ugh..." She rolls her eyes and lowers the paper down to her lap. "Why do I have to learn Kilisi anyway? No one speaks it anymore. Ouch!"

"Sorry, child, another twig." Her nanny smirks. "You must learn Kilisi because you are the princess of Nir, and only the royal family can conduct the ceremonies. When your mother and father pass, it will be up to you to lead the people in our rituals."

Qinadi lowers her head and mumbles, "I hate being the princess. I wish I weren't the Princess of Nir."

Her nanny stops her combing and stares at her ward in the mirror, waiting for the child to lift her eyes. When Qinadi looks up at her nanny's reflection, Qinadi says, "I'm sorry. I know I should not say such things."

With a gentle voice, her nanny says, "The gods can hear you, princess. They hear every word you say. They know you like to play with Joden and run around the fields like any normal thirteen-year-old girl wants to do. They know this, and because they know this they have granted us a long summer, a time of peace, and luscious gardens and forests. The gods have given us a fruitful land with rich harvest year after year since your birth. You have yet to suffer the chills of winter because the gods have spared us from the cold seasons. They have kept war and famine out of our land so that you can have a happy childhood. These are gifts they have granted all of us because you are the Princess of Nir." She lowers her eyes and combs Qinadi's hair. "And if you continue to speak in such a tone, they will take it all away."

After a long sigh, Qinadi nods in the mirror, frowning, feeling frustrated with the fickle nature of her gods. Pressing her lips together, she lifts the sheet of paper to recite the conjugations. In a sharp tone, she says, "Su Baleia, Su Balee. Su Baleoumi. Su Beleoa."

Her nanny clucks her tongue sadly, shakes her head and sighs.