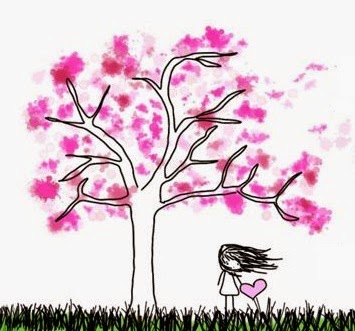 The noise from the machines doesn't bother Talia like they did four weeks ago. She walks past the soft beeps and hums, with a thin book in her hand, and heads straight for the bed. With a little girl's grunt, Talia lifts herself up to sit next to her grandfather.

"What are you reading me today?" Her grandfather asks slowly, taking a breath after every other word.

"The Adventures Of An Astute Girl In An Obtuse World, by Diana St. Thomas," Talia says. She lifts the book so her grandfather can see the cover of a little girl with two braided pigtails swinging from a tree. "If that's okay with you, Grandpa."

"I'm good with it," he says with a weak smile. "Please, proceed. And remember," he takes another breath, and, with his fist in a ball he says proudly, "read it with passion."

Talia nods with her eyebrows arched high and turns to the first page. As she reads the story out loud, the inflection in her voice ascends and descends to match the moods of the characters. Her blond ponytail whips behind her as she pretends to walk up stairs and slide down hills. In another story, she raises her arms as if giving a grand speech to a packed audience, and then bows at the end as if receiving an ovation. She wails because one of the characters broke her leg in another story, and then laughs wholeheartedly after reading a joke about a tuna fish wearing goggles.

Her grandfather chuckles with delight throughout his granddaughter's animated reading. When she finishes, Talia closes the book and lays down with her grandfather. "Bravo!" He says as loud as his weak lungs will allow. "Bravo."

As she stares at the colorful drawings on the wall alongside his bed, she wonders if they made him feel better as she had hoped. It was Talia's idea to make the living room as colorful as possible for her grandfather so he wouldn't feel so sad about not being able to move from his bed. On the first day, she asked him what she could do to make him feel better. "Read to me, with passion, and I promise to get healthy," he replied, and so began their daily readings.

The sound of the machine taking a measurement catches Talia's attention, and she sits up to look at the screen. The nurse stands and checks a tube jutting out of his arm and taps on another machine. Another machine makes a loud beeping sound, and the nurse asks Talia to get her mother. Talia jumps out of bed.

"Wait," her grandfather says, struggling for breath. He reaches for Talia and she grabs his hand. "Remember, live life with passion." He takes a long, shaky breath as Talia nods, tears streaming down her cheeks. As he lets his hand slide out of her grip, he whispers, "Goodbye, my sweet Talia." He lays his head back on his pillows and closes his eyes.

"Goodbye Grandpa," Talia says before running out to the backyard to fetch her mother.