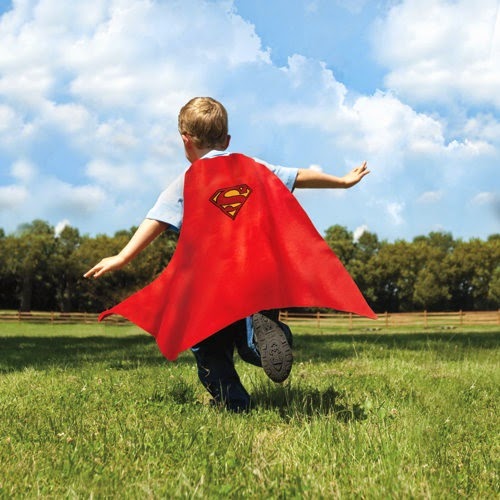 His long, red cape is secure around his neck, and the white laces on his red sneakers are double knotted. Uzi is ready to battle evil in the treacherous world of The Backyard. With a forceful leap from his bed, Uzi hops down from his upper bunk and lands on his two feet with a solid thump. Bullets barks twice, his tail wagging.

After another bark, he stands on all fours and pants with anticipation.

Across the corridor and down the stairs he zooms, his red cape flapping in the trailing gust of wind. Looking through the holes in the red mask over his eyes, Uzi sees danger at the bottom of the staircase. "It's the grocery bags from hell, Bullets. Quick, jump!"

Bullets dashes down the stairs and over the obstacle in one giant bounce. Uzi carefully holds onto the railing, climbs down the steps one by one until he passes the white bags blocking his path.

"We made it Bullets!"

Bullets barks twice and jumps on his hind legs for a brief second.

"What is it Bullets? Tell me boy. Is it the Dadonator? Where is he? Where?"

After turning in a complete circle, Bullets barks again towards the front door as Uzi's father walks in with more grocery bags.

"He's coming Bullets! We have to get away. Wait..." Uzi grabs the red and white paisley handkerchief from the floor, folds it in a triangle, and wraps it around Bullet's collar tying a knot at the back of his neck. "We have to put your shield back on. You can't fight crime without your shield."

Uzi's father says something, but Uzi has no time to waste. He darts through the kitchen and out the patio door with Bullets following close behind. After several laps around the yard with his arms spread out as if flying across the sky, he finally comes to the cast-iron bench posted under the cherry blossom tree to take a breath. Bullets jumps up to the bench and sits with him, his tongue wagging.

"Now that we're at our secret lair, we need to figure out the Dadonator's next move. You go down below to check the ser-vay-lens cameras, and I'll check the computer up here. We have to come up with a stra-je-dee."

Bullets barks in agreement before taking his position under the cast iron bench and laying on his side with his head up at guard. On his knees with his fingers keyboarding the bench, Uzi scans the Dadonator's latest moves on his make-believe computer screen.

"Bullets," Uzi's father calls out, standing at the patio door with Bullet's tray in his hand. "Come and get it boy!"

Bullet's ears stand up with full alert, his tongue disappearing into his mouth as he concentrates.

As the dry dog food pellets fall into the metal tray, Bullets wiggles out from under the bench. Uzi wraps his arms around Bullets, but the golden retriever is too strong, and he drags Uzi forward. "No, Bullets. Nooooo!"

"But Dad," Uzi says, letting go of Bullets and lifting his arms in the air and then letting them fall to his side. "He's my sidekick. I can't be a superhero without a sidekick."

"You can be a superhero as soon as he's had his lunch. Now go inside. Mom's got your sandwich waiting."

Uzi gives Bullets the stink-eye as he chows down into his bowl, making chomping, moaning noises, devouring his food. He looks up to his father, stretches out his fist close to his father's chest, and says, "You are good, Dadonator. But I will be back, after lunch."

"You're not going to have ice-cream?" his father says with a sideways smile.

He glances into the kitchen and sees his mother unpacking a pack of ice-cream sandwiches from the grocery bags. He squints and presses his lips together as he rethinks his plan. "I'll be back after I eat my ice-cream, and then you will pay for what you have done. I swear to it!"