A Mouse In A House
Posted on July 12, 2015
Herman McFidigan never liked being outside. He was, after all, a small field mouse - the natural prey of any creature with wings or claws or speed or the ability to pounce at will. He was timid, suffered from a mild case of schizophrenia, and was utterly alone.

Except for the voices in his head. They kept him plenty company.

As he was preparing his meal of wheat grass and nuts, he heard a knocking at the door of the old house he was inhabiting. No one answered, naturally, since there was no one living there. The knock grew louder and Herman found himself trembling under his matchbox bed. He blew out the tiny candle on his thumbnail nightstand and covered his ears.

"They're coming to get you, Herman." The female voice in his head said.

The pounding stopped and the door creaked open. A light scent of chemicals traveled across the room with the breeze. Slow footsteps drowned out the rain slamming against the windows. He could still hear the thunder.

"B-b-b-but, the outside world is dangerous. I will die." Herman shivered as he covered his head with his blue night shirt.

As she repeated those words,  Herman scrambled to his feet and dashed out the burrowed corridor that lead to the backyard. He's never gone out of the house before, but he trusted his voices. They told him things, truths, and kept him safe all these years. He believed his voices knew more than he did, and so he listened to their advice.

He ran through the tunnel for what seemed like hours, and soon he was outside standing on a grassy field under the brilliant morning sun.

"There," said the female voice as Herman wiped dirt and grease from his blue night shirt. "Now, you will live." 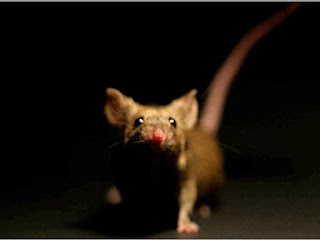