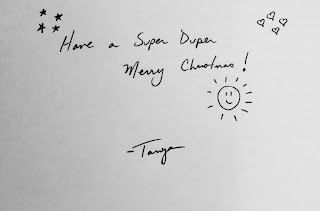 The year my son was born, after I went back to working 50-60 hours a week, with a 6-year-old having started 1st grade, my husband and I forgot to get each other Christmas gifts. We remembered everyone else in our family, because, seriously, you're not allowed to forget ANYONE, lest you want to be branded a scarlet letter for being the worst daughter/son/sister/cousin/nephew/etc...

My husband and I made sure the list was completed.

Christmas morning, the day after all the festivities with our families, my daughter and I sat at our dining table in our pajamas to create some art. My son was in his baby seat sucking on something - at six months old he sucked on everything - and my daughter pulled out all her art supplies. She was always drawing something back then. As she colored, I drew a stick figure wearing a red and white Christmas hat, whipping at reindeer as it stood on a sled flying across the sky. I wrote Merry Christmas 2007 at the bottom and showed it to everyone. By "everyone" I mean my daughter who loved everything and anything I drew, my son who stare out the window while trying to lick the paint off some plastic toy, and my husband who was asleep on the couch. We were taking turns napping during those days.

When my husband woke up, he saw my drawing and, for some odd reason I could never figure out, it reminded him that he had forgotten to get me a gift. I said I didn't care, and I meant it, but he didn't like that. He put on his jacket and sneakers and, still wearing his pajama pants, ran out the door. When he came home, he went straight to his computer. He had gone to CVS and bought a blank card with the picture of a frog on the cover that he was now filling with poems from the internet. I didn't realize he was doing this until I approached him and he shooed me away, all secret-like while being obvious that he was writing something for me.

So then, of course, I went to CVS (thank goodness for 24-hour stores open all year long) and got a blank card and did the same, after I got fully dressed because my old-lady pink plaid pajama pants weren't as cool as his Batman pajama pants.

At the end of the day, before going to bed, we exchanged cards. I cried a bit after I read one of the small sentimental poems he created. He laughed at my "muscular" stick figure drawing of him holding both my kids in his arms under a cloud of cartoony heart-shaped snowflakes. It was one of the best little moments we had together.

That Christmas set a precedence. For all the Christmases since then, my husband and I give each other a hand-written gift. Sometimes we'll get a little something for each other, but the gift is never as good as the card. Soon, both my kids joined our new tradition, and now we get something creative every year, be it a card, drawing, poem, what have you. They create it, and that's the best gift ever.

And let me tell you something... there is nothing like the feeling you get when you come across a hand-written card from your 6/7/8-year-old (who is now 14! Oy.) that is full of mushy, squishy, innocent sentiment. That goofy sensation you get when you see something misspelled, or the wannabe adult signature, or an attempt at rhyming, or a drawing of your family and hearts and stars and happy faces all over the place, wishing The Best Mom/Dad Ever a Super Duper Merry Christmas....

This stuff is priceless.