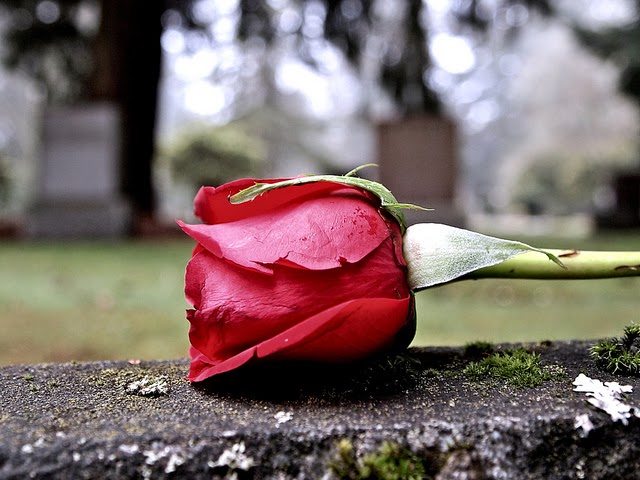 The sun setting at the horizon tells Nina it's time to go. A skinny tail of smoke rises from her cigarette as she takes the last, long toke before rubbing the cigarette butt on top of the black marble tombstone of her husband's last resting place.

"I came to say goodbye, Jared." The words wrench her gut as she pushes them past her tongue. "I've found someone." Her bottom  lip trembles. "I know we made promises, but, some promises must be broken. I will always love you, but I have to move on." She places a bright crimson rose on top of the tomb, as she has done upon every visit for the past ten years. "Goodbye, Jared."

The icy October wind grazes Nina's cheeks as she walks back to her car, reminding her of the ice sculpture she has to order for her wedding next weekend. It's a bittersweet moment, sitting in her truck remembering her first love who died ten years ago, and thinking about her upcoming wedding to Brandon. They met in a support group three years ago, both having lost their spouses to heroin, both having almost lost themselves to the intoxicating life of sex, drugs, and alcohol. They had supported one another for weeks before Brandon and Nina shared a moment that prompted their first kiss. Their lives were finally healing.

Nina knew Brandon truly loved her the day she confessed her worst crime. Jared and Nina had both tried to overdose together as part of a drug-induced death pact. The hospital saved Nina; Jared was dead on arrival. The news hit Brandon like a bat to the head, knocking him out of their relationship for a couple of days. Once he let the severity of the confession sink in and understood the burden Nina placed on herself, he realized he still loved her. Confessing was the most courageous thing she ever did, and he loved her more because of it.

The car rocks back and forth as the northern winds begin their descent upon the east coast, bringing Nina back to the cemetery parking lot. She turns on the ignition and drives onto the road. Rain falls, and soon she hears a loud tapping sound on the car's roof. Nina pulls over on the narrow road and waits nervously as sheets of ice cover her entire car. After another few minutes of pounding hail, the storm finally stops.

A layer of fog blankets the windows. A slow, squeaking sound pulls Nina's eyes to her left, and she watches in awe as letters appear in the grayish-white film on her driver side window.

A loud knock by an officer with a flashlight signals her to open her window, shaking her from her spell. She rolls it down, wiping away the foggy message on the inside.

"Are you okay?" The officer asks, with his flashlight shining on her face.

"Yes. I was just waiting for the hailstorm to pass."

Nina takes a moment to scan the clear evening sky. "My windows fogged up, and I couldn't see, so I pulled over."

The officer asks Nina a few more questions, to make sure she was not intoxicated, before giving her a warning and driving away. She blows out a burst of air slowly through her mouth. "That was weird." She pulls out onto the narrow road and heads home.

After a few minutes, the loud tapping sound starts up, and fog appears on the windshield again. She pulls over and parks the car once more.

The street lamp along the road creates a dim glow through the fog. A slow, squeaking sound draws her attention to the left and, once again, lines form on the driver's side window. A letter takes shape, then another. Nina's heart begins to race the instant she reads the two words in the window next to her.

The same words appear on the windshield, multiple times, each time getting bigger as if the writer wants to shout the words at her. Hail continues to pound the roof of the car as the same two words appear on the side windows, on the back window, and in the rear-view mirror. Panic sets in; Nina's bottom lip quivers.

The hailstorm ends, and the car is eerily quiet. New words appear on the windshield.

WE MADE A PACT

Frightened, and on the brink of going insane, Nina pushes open the door and pulls herself out of the car just as an eighteen-wheeled freight truck passes by. She is killed instantly.

In the car, new words appear in the windshield on a fresh layer of fog.

OUR LOVE WILL NEVER DIE