Snowfall
Posted on October 30, 2013
When I drive around the corner of my block, I see two ambulances and several police cars surrounding a Mini Cooper that seemed to have crashed sideways into a street lamp, just a few doors from my house.

I get out of my car and walk up to Jessie, the town's marathon runner who is well known for running in tight athletic gear even on the coldest days of the year. She's now wearing black running clothes with streaks of neon along her side and back that reflects light when light shines upon them. Not even the first snowfall of the year keeps her from her routine.

"Hey Jessie, what happened?" I ask in a whisper. She seems mesmerized by the scene.

"The car ran off the road and just..." Her voice catches. She shakes her head and takes a long deep breath.

"That's horrible," I say staring at the police as they toss a white blanket on the ground. A small crowd has formed, so I can't see what they're covering. "Who was in the car?"

"Vivian and her daughter Kari." She points to one of the two ambulances. "See there? They're in that ambulance."

"Looks like her daughter's talking to the doctor. That's a good sign," I say with a sense of relief.

"Yeah." From the side I can see a gentle smile sneak onto her face. "Kari's always been a tough one, curly pigtails and all, just like her mother."

Jessie nods and smiles softly. "Since we were kids. We used to..." Her voice fades and she clears her throat. She releases a long smokey sigh into the cold night air. "I have to go. My mother's waiting for me."

As if moving in slow motion, Jessie puts on her ear buds one ear at a time. She waves a sad good bye at me and jogs away from the scene, down the block and around the corner.

Ramon, my retired neighbor with a grizzly beard wearing a red plaid wool coat and matching flannel hat, happens to be standing just a few feet behind me. I ask him about the accident.

"It was horrible," he says with a look of disbelief spread across his face. "The car skidded off the road and hit the lamp post and made a crackle noise. It crushed that woman on the ground."

"Oh my God." I say as an icy chill crawls down my back.

"Do you know Jessie, the young woman whose always running even when it's cold? She runs down this street all the time." Ramon asks.

I nod. "Yeah, Jessie, she was here just a moment ago."

"What are you talking about? She was crushed by that Mini Cooper."

"No," I say with a nervous chuckle. "You must be mistaken. She was just right here next to me. She had to leave because her mother was waiting for her."

"Her mother?" Ramon says with his eyes wide open. "Her mother died when she was ten. She's been dead for almost twenty years." 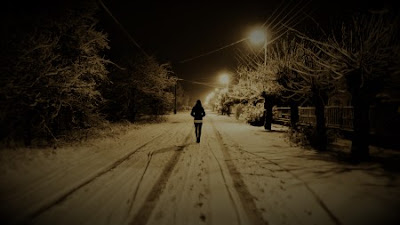