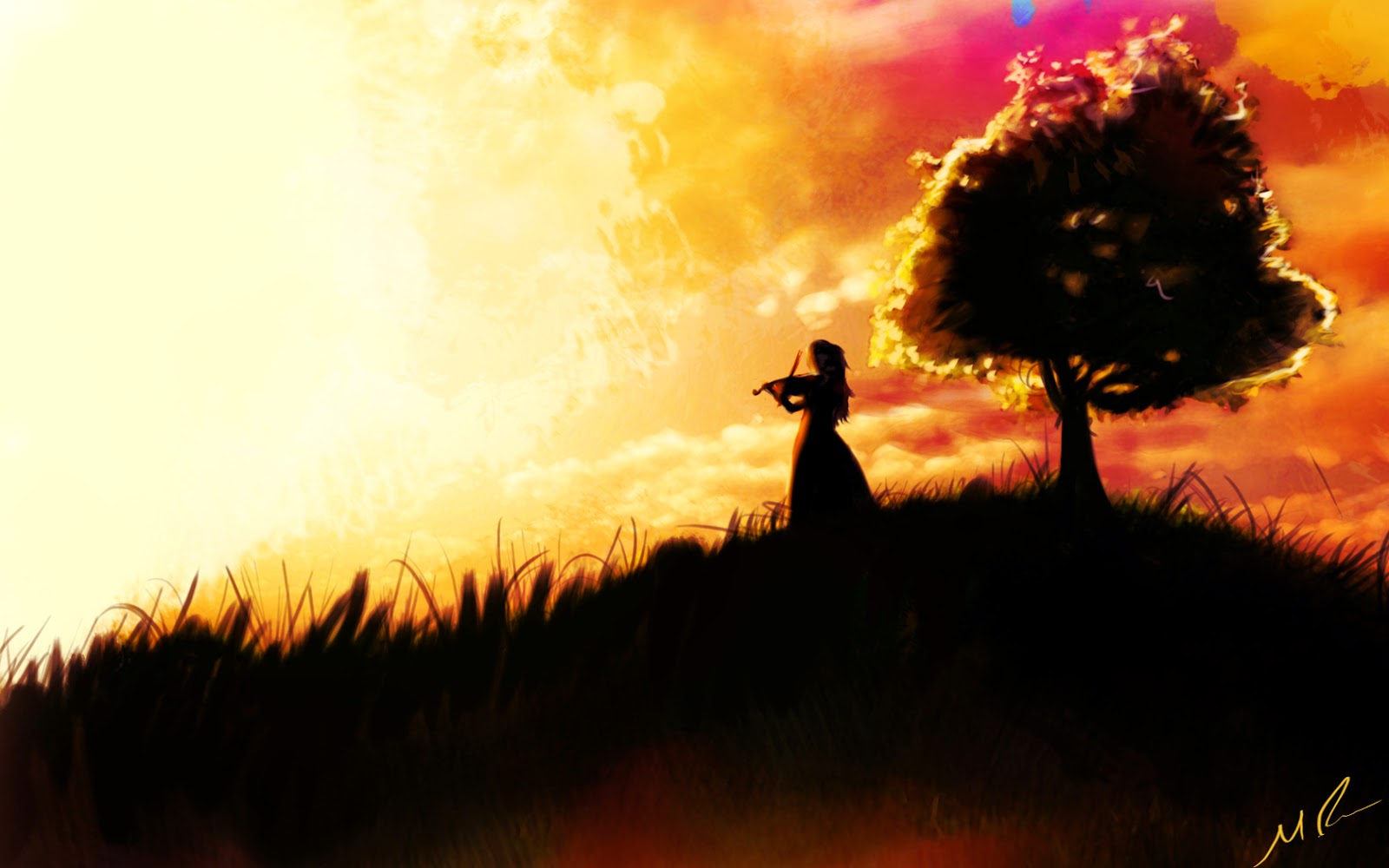 Kenzi dashes into the small music store, a jingle bursts above her head from the slamming bell.

"Slow down Kenzi. The instruments aren't going anywhere," her grandfather yells behind her.

Blushing, and with a quick nod, Kenzi stops in front of the counter and turns around to watch her grandfather inch his way through the front door. Bouncing on her toes, Kenzi shakes her hands hurrying her grandfather forward.

He chuckles as his glance falls upon the old man behind the counter. "Excited about getting a new instrument, is she?" the old man says in a high-pitched voice.

"Nothing like a child's enthusiasm to bring about the sunshine in a day, eh? What can I do for you Little Miss?"

Kenzi jerks her arm out back and forth with her index finger pointing at the violins hanging in the string section of the store. She sucks in air and breathes it out, presses her lips together and grunts at her grandfather. The desperate wrinkles in her forehead beg for speed from these two old men.

Taking off his leather gloves and stuffing them into his pocket, Kenzi's grandfather says, "I promised I would get Kenzi a violin for her ninth birthday."

"Ah," says the old man as he glances back and forth at Kenzi and her grandfather. "Little Miss, are you ready to try some violins?"

Kenzi nods at the old man and her grandfather, her blond ponytail wagging with delight. She clasps her hands together in a prayer fold and bounces on her toes once more, her eyebrows arching upwards.

The old man smiles as he walks around the counter to his new customer. He bends down and meet's Kenzi's wide eyes. "You should know the violin requires daily practice, dedication, and careful study. It isn't a toy you be sharing with your friends now. They can never touch it. No one can touch it except you and your parents, is that understood? You treat the violin like a newborn child, with tenderness and care, and it will return the favor."

Kenzi nods slowly, now standing firmly on the ground with her hands folded in front of her and her lips in a tight line. Breathing deeply, she stares at the old man's serious face as he speaks.

"Well then, no need to be turning off the fire in your eyes. Come now," he says, turning towards the string section and shuffling forwards, "let us find you your violin."

Kenzi can't help but gasp at every violin the old man pulls down from a stand, each one prettier than the next. Before handing a violin to Kenzi, the old man plays a quick piece to demonstrate it's power, it's gentleness, it's beauty. Each time, Kenzi holds her breath until the fluttering piece of music stops and the old man places the work of art in her trembling hands.

With each violin, Kenzi glides her fingers along the shiny, smooth surface of the body, tracing the curves of the F-Hole and the outer edges of the master workmanship. After taking a moment to study its lines, memorizing the thicknesses of each string, and resisting the urge to hug the instrument, Kenzi sits upon a stool and places it under her chin. With each violin, the old man adjusts the instrument in her hold and decides if it fits.

"This one won't do," he says seven times until Kenzi tries the eighth violin. Kenzi's posture and handling of the violin are natural, comfortable; she sits on the stool awaiting the old man's approval. The old man gives a knowing glance at Kenzi's grandfather and a grin at Kenzi. "Looks like we found your match. Let's have a go at her, shall we?"

After a few clumsy passes of the bow, the bow's hair skipping unpredictably across the strings, Kenzi finally manages to slide it across, producing choppy sounds in the process. She repeats with confidence, occasionally catching a glimpse of an actual note. The old man smiles at Kenzi's grandfather. "She's a natural, this one. Usually, the little ones are shaking from the screeches, but she doesn't seem to mind it too much."  The old man stops her playing and asks, "Do you like this one?"

Kenzi stands and nods her head again, her excitement setting her ponytail loose. She carefully places the violin flat on a cloth table, with the bow at its side, and ties her hair back up behind her head. Once her hair is secure, she picks up the violin and starts playing.

The old man and her grandfather both smile. "She is certainly disciplined enough," the old man says. "She doesn't speak much though."

"No vocal chords. Had to have them removed when she was sixteen months old. Her parents caught an infection that..." Kenzi's grandfather's voice catches. He swallows hard and clears his throat. "Her hearing is perfect, and she communicates through sign language and writing. She already plays the piano, but she insists on the violin, so here we are. What deal can you make me for the violin and her classes. Please keep in mind that I'm living on retirement income."

After watching Kenzi for several minutes now, the old man says. "Tell you what. I'll give you two lessons a week for the price of one. You can lease or finance that violin. I usually don't do that with the Yamahas, they're top of the line, but..."

Kenzi's father waves the gesture off as a shock travels throughout his body from the squeals of the violin. "Oh, no, there's no need for that. We'll choose a less expensive violin."

The old man chuckles, unaffected by the sharp sounds. "You don't understand. It's not often you see a child perfectly matched to an instrument. I've taught violin for over forty years, and children like Kenzi don't come around too often. No... the Yamaha is for her. You can lease it, but don't choose a lesser instrument. If it helps, I'll give you the first month of lessons free."

"Okay, two months free," the old man says. "That's two lessons a week for two months. There is no commitment if you lease the violin month to month. Trust me. The money is well spent. You won't regret it. Just listen to her - she's already getting better."

Kenzi sways left and right with her eyes shut as the unintentional screeches slowly transform into solid notes flowing through the air like a cool Spring breeze under a warm sun. Her grandfather's chest swells with pride, pain, and happiness. A tear forms in his eye. If only your parents were alive to hear your music.

He turns to the old man with his hand stretched out. "It's a deal."