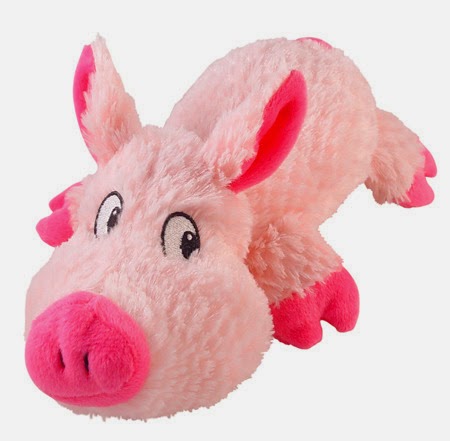 Nina's mother doesn't seem to notice the sound of Nina's pink piggy toy, so Nina puts it closer to her mother's ear to see if that will do the trick. She pumps the air in and out of the toy, creating a sharp, high-pitched squeal, and Nina's mother jumps up to a sitting position in her bed.

"What the hell?" Nina's mother says as she rubs her eyes.

"Nina, you can't do that to Momma. Momma needs her sleep."

Giggles trail her exit as Nina dashes out the door. With heavy steps, Nina crosses the length of the long hallway to her ten-year-old brother's bedroom. She squeaks her toy.

Snuggled tightly under the covers, her brother moans.

Nina takes a step close, on her toes, and squeezes the pig again.

After another groan, and her brother places his pillow over his head and presses down.

One more step closer, with her arm raised, so the pig is close to her brother's ear, Nina squeaks her toy at hard as her little hands allow.

With a wave a blankets falling to the floor, her brother sits up in his bed and shouts down at Nina, "Go away!"

She presses and releases the toy repeatedly, creating a squeaking symphony accompanied by laughter and giggles. Her blond locks bounce as she plays her instrument and shakes her shoulders and hips, dancing with glee. Her brother shouts at Nina, and she runs out the bedroom with the speed and grace of a farm chicken. She heads to her baby sister's room.

When Nina approaches her baby sister's bedroom door, she turns the doorknob smoothly and gently pushes the door open. Pursing her lips, she tiptoes to the crib and peeks between the white bars, her eyebrows arched with tender excitement. After a few seconds of watching her baby sister sleep, Nina quietly moves the white plastic stool to the middle of the floor next to the crib. With the might of a feisty three-year-old, she lifts herself up the stool, carefully leans over the cribs edge, and places the pink squeaky pig toy next to her sister. She looks at the pig and places an index finger on her lips. "Be quiet," Nina whispers at the pig before stepping down the stool and heading to her mother's room to ask for breakfast.