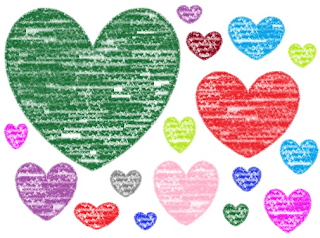 Little Victor doesn't have to think twice about who would be his Valentine this year. Gabriela, who sits next to him in his second grade class, is the one for him.

When his mother sees that Victor has written the same name on ten separate Spider Man Valentine's day cards from the pack of thirty, she suddenly becomes curious. "Victor, who's Gabriela?"

"She's my girlfriend," he answers in a matter-of-fact tone. He proceeds to finish the last "a" in her name with the blue marker before adding it to the card the pile. He pulls out the next card, with Spider Man swinging across a starry skyline carrying a giant pink heart, and flips it to the stencil side. On the "To" line, he writes the "G" in a swirly cursive style with the purple marker.

Victor's mother sits down next to him at the dining table and starts counting the girls's names on the list of students his teacher sent home. "Why are you only writing Gabriela's name. You have fifteen other girls on the list. You have to give each one a card."

"But they're not my Valentine."

"I know, but you're going to make the other girls feel bad if you give all your cards to one person."

Victor finishes the last "a" and stares at the pile. He blinks twice, takes a deep breath, and looks up at his mother with confusion spread across his face. Then he picks up a green crayon to color in a heart outline just below Gabriela's name.

"The other kids in the class may get their feelings hurt. You see..."

"It's okay Mom," he says while concentrating hard on blending the second layer of green with the first. "I get it."

She folds her arms and sits back on the chair. "What do you get, Victor?"

"You think I should give all the girls in the class a Valentine's day card, to be fair to everyone. But then I'd be lying, because only Gabriela is my girlfriend. She's my Valentine. You don't want me to lie to the other girls, do you?"

"Then I can't give them Valentines." Victor shrugs his shoulders as if he can't help the situation and finishes coloring his green heart. He places the card on the pile and pulls out the next card with Spider Man spraying a heart-shaped web against a pink wall. He takes the green marker and begins writing Gabriela's name.

His mother tries another approach. "Okay. Gabriela's your Valentine. I get it. But do you have to give her so many cards?"

Victor rolls his eyes and sighs heavily. "Mom, you bought the pack of thirty cards, not me!"