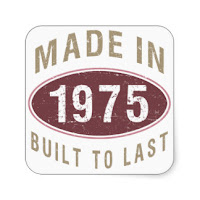 My 40th birthday came and went, quietly, like a white feather gliding along the current of a mild summer wind. Did you see it? No? Well it was there, I swear!

I went to breakfast with my parents, did some construction shopping for the renovations I'm doing to the house, went to my daughter's softball game, and then went home with a throbbing headache the likes I haven't had in years. Took some Advil, ordered out, and then I went to sleep.

Pretty anti-climactic, right? Well, here's the thing. I'm incredibly superstitious about celebrating my own good fortune. I don't want to celebrate too loudly because The Fates might hear. Don't know who they are? Check this link to learn all about them. I was really into Greek Mythology when I was a kid and it stuck to me ever since. Just the idea of their imaginary existence gives me shivers.

I mean, The Fates are a lovely bunch of goddesses. No need to change anything ladies. Everything is good here.

So, as a result of devouring Greek Mythology as truth when I was a kid, I've grown up to be more low key about birthday celebrations than most. And, since 40 was a big one, to me it was one of the ones I had to keep the most shushed.

But, this post isn't about my silly neurosis, it's about how people are afraid of getting older. Yeah, it's scary but I'm not going to worry about it. Talk about wasting time and energy on something you have no control over. Own it, damn it! I'm 40. So freaking what?!?!?

And just because I'm older, that doesn't mean I'm old. It's still me, just another day older. I run like I did last year, and I play softball and soccer with my kids like last year, I'm still writing, and I do pretty much everything the same as I did last year. I feel strong and healthy ... I feel freaking awesome!

I love The Fates! They totally rock!

To conclude this rant I'll provide an anecdote. This past weekend, someone asked me, "How does it feel to be 40?" I replied by shrugging my shoulders and saying, "No difference, really." Because, I really didn't notice a change between July 2nd and July 3rd or even July 4th.

His reply? He widened his eyes and said, "I can't imagine being 40. I'm dreading it."

Really? I mean... Really? Of all the things to be scared of in the world, turning 40 frightens you?

I thought it was an odd comment to make considering he's only a handful of years away. Odd, and a bit a-hole of him. I mean, I'm cool with being older, but if I wasn't and I was freaking out and having some kind of nervous breakdown, how obnoxious would that have sounded? I'm sure he was just joking, but part of me feels he was serious. You know how some jokes are funny because there's a truth behind them... well, I think this was one of those jokes.

And then he went on to talk about how he's "already" feeling old.

Please. That's just you buddy. That has nothing to do with turning 40.

Anyway, I guess the message is, keep a level head about growing older. Exercise your mind and your body, because your body needs more than just your brain to stay strong and healthy. And for fuck sake, be nice to people. No one will care about what awards you earned or how much money you made after you're dead -- they will only remember how you treated them.

Trust me. I will remember his comment for years to come. It will live in infamy.