Celebrate The Small Stuff : Drawing
Posted on August 19, 2016
Today is Friday, and that means it's time to celebrate all the small things that are totally awesome in your life and all the little successes you've had during the past week.

This week, I am celebrating my rekindled love of line art.

These last few weeks I have been working with some talented poets in the Poetry Universe Facebook group on a compilation that is close to being published. I've been providing technical support in the self-publishing process like page layout and formatting, image optimization, etc. There were some incredible drawings in the compilation and it has inspired me to take up some drawing. I used to draw tons when I was younger until my art was literally discarded by a jealous boyfriend in college. The incident killed my desire -- but that's disgusting festered water under the bridge.

The point is, I'm starting to get the itch again, and my husband just so happened to get me a set of Roting isograph pens for my birthday back in July. Evidently, I have been doodling and drawing line art enough that he thinks I should have some real tools of the trade. These pens are absolutely fantastic. Even though they are marketed towards architect and technical drawing types, I still love them.


I didn't get to use them much when he gave them to me last month because... well... life, but I started using them last week. Here are the results of my practice runs with the .25 and .5 pens. These are all single continuous lines...


Those were just the test runs to get used to using the ink pens. I wasn't expecting it to be messy at first, but if you've never poured actual ink from bottle, be ready. Ink got everywhere on the first try. I was washing ink off my right cheek afterwards.

That was day one. Lots of hand and face washing. I was more careful afterwards.

A few days later, I decided I wanted to draw real objects out of my imagination. I usually draw stick figures doing all sorts of things, like parachuting or fishing, where the stick-person is the main object, because... I love stick people. But, this time I wanted to do some scenery. So, I tried drawing a city street. 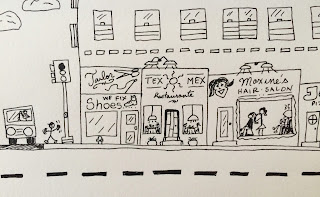 A shoe store, restaurant, hair salon, and a pizza place at the base of an apartment building, on a single city block -- those places are all fake, but Bergenline in North Bergen looks very much like this. Of course, my stick people make an appearance. What's a city without people, right?

Then I tried drawing a picnic in the mountains. The problem with ink is you can't erase, so when I drew the picnic blanked all disjointed from the perspective of the scene, I had to leave it there. I slapped my forehead after I drew it - talk about a brain fart. I tried to deflect the error with rocks and "happy ants". 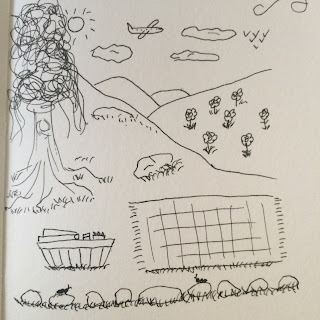 My trees need work - instead of leafs and branches, it looks like a messy updo hair style. I think that swirl at the upper right was meant to be wind. Who knows...

And lastly, I though I'd try to draw a vase of flowers. Looks more like a vase of dried-up dead flower stems, something in a Tim Burton movie. Still, I like my dead stick flowers. Maybe all my life forms take on a stick-figure personality. 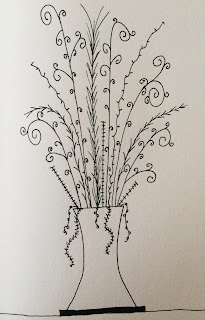 I know what you are thinking... "Tanya, hot momma, you sultry vixen you... it's so cartoony! What gives?" I know, I know... I was hoping for something more realistic, but these are pens, and I have yet to get a how-to book on anything to do with drawing. That's my next step.

And I promise you, all of the pictures look a thousand times better in my mind.

"So what's the goal?", you ask. I am going to work on another poetry compilation where my poems will be included, and I may include some drawings. You know how sometimes you know EXACTLY what you want in an image but you can never find it anywhere... wouldn't it be great if you had the ability to draw it? That's my goal. I hope to draw the images in my head, the way they appear, with crisp clarity and maybe some color.

And, hopefully, a lot less cartoony.